This year’s fall musical presented by KHS Visual & Performing Arts in collaboration with MSK was Newsies! The cast and crew directed by Dennis St. Pierre and Eric Desmarais brought the audience back to 1899 and told a true story about the first ever strike held by children. They fought against the corporate heads of the newspaper for their right to fair wages and won! 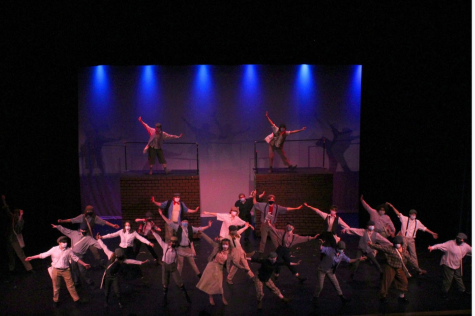 From November 4 to the 7 the entire cast and crew entertained a sold out show every night! The support for this show was well earned by the amount of time and effort put into producing it. The sophomore Stage Manager, Erin McNeilly, as well as a cast member, Crow Lowry, estimated that they spent 100 to 150+ hours all together preparing for the show. McNeilly added, “There were a lot of things I had to do on my own time so everyone would be on the same page,”. There seems to be a misconception that theatre is just a hobby but the amount of work that went into building the moving platforms, organizing rehearsals, painting sets, learning dances and songs, not to mention the amount of line memorization is obvious in the enthusiastic presentation of the play. Ellie Mason, a senior cast member who played Davey, explains that “…you had to always be thinking about what you were doing, no matter what you were doing, you were going to affect the productivity of everyone else.” The theatre community is described as a family by Walter Paulo, who was a part of the stage crew. He goes on to explain that he, “…feels like [he] belongs there”. This type of atmosphere can be expected when working as a team to produce an emotional piece such as Newsies. Finn Fairfield, who played Crutchie, even said that this space allows her to, “…pretend to be someone else for a while.” It truly takes a village as well as strong leaders to organize a cohesive show. Luckily, we happen to have many leaders, including Erin McNeilly, Dennis St. Pierre, and Eric Desmarais who stepped up.

This year’s production was also made extra special by the students from MSK joining the play and expanding ‘the village’.

Newsies required a heavier ensemble that the middle schoolers were enthusiastic to participate in. The audience also got a special surprise from Mary Jensen, a 7th grader at MSK, who played Les alongside the upperclassmen in a lead role. When asked if she is planning on continuing performing, as there have been rumors of including MSK students in future fall plays, Jensen said she is excited to audition for more KHS productions and has “learned so much from [her] castmates [that she’s] looked up to after having seen them perform in previous middle and high school productions”. Another 7th grader who was a part of the ensemble, Bobby Maclver, found that he benefited from being a part of Newsies because, “middle schoolers don’t have their voice fully developed or they don’t really want to be in the play…but at KHS…everyone there wanted to do it.” He also added that being a part of the ensemble was, “…super duper fun because you get to sing and dance the whole time!”

The welcoming spirit of the whole theatre community seems to be echoed through everyone that contributed to Newsies. Those that were interviewed were asked, “What was your favorite part of being a part of this production?”. Here are a few of the responses: 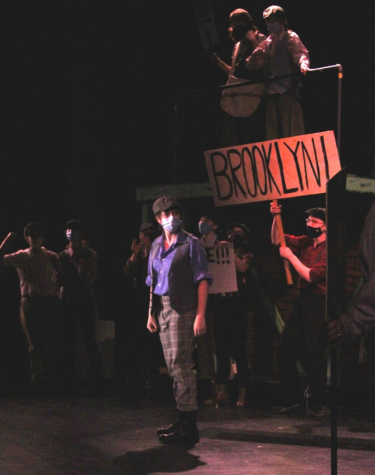 From Curtis Morgan, who played Jack:

“My favorite part of the whole production for me was performing an amazing musical with some of my absolute best friends. All the exhaustion, dedication, and hours that go into making a production is 100% worth every second when you are around people you absolutely love” 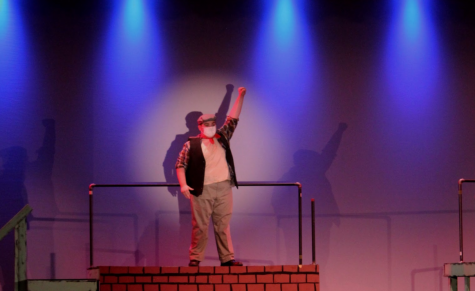 “My favorite part was the energy of the show! Newsies is such a fun and upbeat musical and a favorite among a lot of the cast, including myself. You could really feel that love and passion for the show every time we stepped on stage.”

From Brady Lemieux, who was the lighting director :

“I love hanging out with the members of the cast and crew over the course of the shows, they’re all funny and really fun to be around.”

From Kylie Parsons, who played Katherine :

“I think my favorite part of being in this production was being able to create and present an amazing piece of theatre with some of my closest friends. Though the rehearsal process is full of long hours, being able to present a piece of work that my friends and I all put our heart and souls into is incredibly rewarding. The community that is built among the cast is so supportive, and it’s wonderful to work with everyone to create something we are proud of.”

“I think my favorite part of being in the production was getting to know the cast. When you spend hours a day with people, it’s nice to get to know them, at least a bit. They are genuinely such nice people and really welcoming and especially to people they hadn’t done a show with before, like me. In my opinion, to have a great show you need to have a great cast and I think we did.”

It is obvious how much of themselves that the cast and crew put into this year’s production of Newsies. Their hard work and dedication were rewarded with lifelong memories, new experiences, a loving community, and successful sold out performances!

Congratulations to you all!